As the group of first graders took to the risers this afternoon, their music teacher asked them, “What are some things we need to remember for today?” One child said ‘Sing from your chest.‘ Another said, ‘No touching each other‘. Another said, ‘Stand up straight and tall‘. A little guy that’s been with my daughter for three years raised his hand and said, ‘No negatives‘…The teacher asked him to explain to everyone what he meant. He described it as ‘Don’t say no. Don’t say don’t do this or don’t do that’…

Here is a little on how that breaks down…

It is the running theme in her school that all the parents, staff and students work together to support what they call Socio-Emotional health. 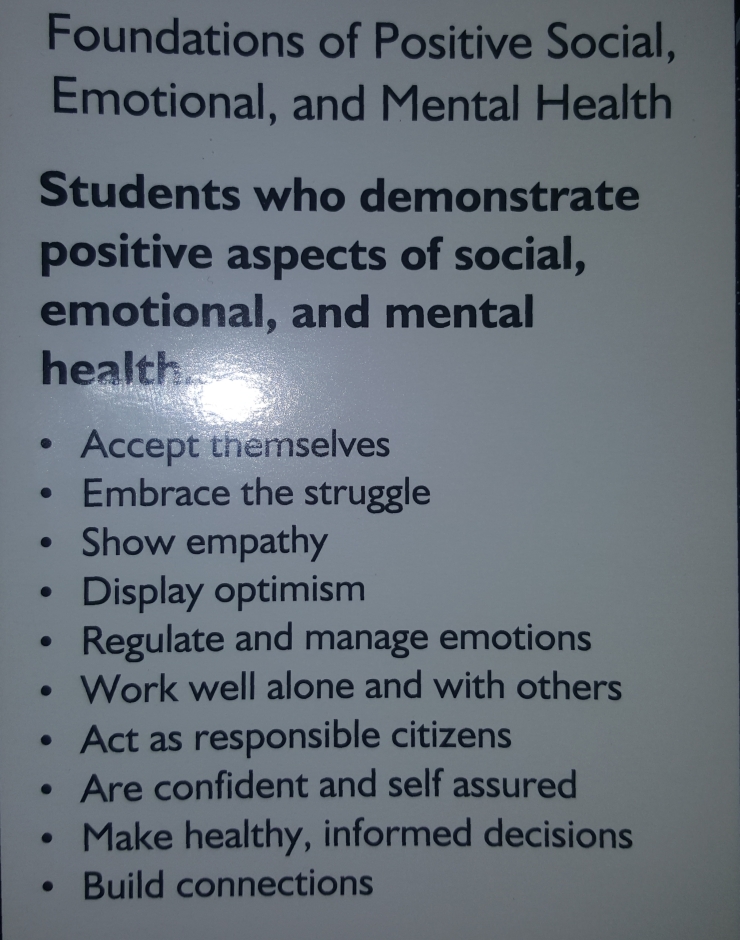 It’s an environment of inclusion but also one where they are taught ‘everyone may not be *where* you are’, and the needed acceptance for others including themselves, and tolerance for matters that, quoted in their student produced video, “we may not understand now, but we will!” They are learning that their school community, which is a large portion of their life experience, very closely mirrors that of what they will experience later outside the confines of what is, now, comfortable and reasonably controlled and mediated.

We were provided a list early in the year that accompanied the video, on ways we could help augment the coping skills the children are learning at school. A great deal of it focuses on support of anger and frustration. Emotions in children that are often taboo and brushed aside as unnecessary, out of line or just plain irritating…lack of proper rearing even. It got me thinking just how adults are, much later on, still so intolerant of each others frustration and anger. You don’t want to hear it. See it. Surely, you’ve got better things to do. No time to field blame. Most of all, you just don’t want to deal with it. Sounds a lot like a parent put upon by their child’s untimely outburst doesn’t it. I’ve read in the past that having to deal with the big emotions of our kids is so off putting because, at the core, it is “upsetting the grand plan”. For the day. The week. Life. Whenever. And I certainly agree. When we feel anything, we are merely an inconvenience to others. I fear my daughters growing into women who feel either inconvenienced by others emotions, or are worried that feeling anything makes them a burden.

We are nobody’s Fall Guy, that’s true, but as humans we do have to be accountable. The reality is, in order to be emotionally healthy, *kind* adults, we can’t simply ignore each others feelings. That isn’t what we would want for ourselves, is it. So, along with learning how they can support one anothers trials, a lot of the work they do stresses validation that what they feel *is* normal. And they learn to accept themselves in spite of their off days. And they are learning to express their feelings clearly and reasonably. We always tell our children “use your words”. Sounds ridiculous if we were to say that to grown ups. But there are many who will not simply use their words. Then the lack of understanding they feel grows to power plays, pouting and expecting others to pander to us in order to draw our emotions out. Which leads to more frustration when not received. It would seem we would all want to be understood. To have a voice. To be able to say I Feel…and have it be okay.

This healthy communication is stressed with the help of things like learning supportive listening, and practicing empathy. They teach this with the instruction “imagine walking in someone elses shoes.” This is easy enough for children to do. Adults can be mindful of it from time to time as well. Also, Breather Boxes. A collection of shoeboxes with activities to calm yourself and recenter when you aren’t feeling your best. Writing it out is always encouraged. Counting. They’ve learned basic yoga and self guided meditation to help themselves as well. My daughters favorite part of the box is the little hand mirror so she can see herself when she’s feeling off. And recognize it.

…Back to ‘No negatives.‘ This is a focused communication wherein the children state their needs in any situation by telling someone how they can help, how they can learn or how they can understand, without saying the word Don’t. It’s a positive reprogramming where, in music class, they wouldn’t say ‘don’t slouch’. They would say ‘stand up nice and tall’. In class they wouldn’t say ‘don’t hog the ipad’. They would say ‘it is my turn now’. And with a friend they wouldn’t say ‘don’t do it that way’. They would say, ‘try it this way’. I hollered at my daughter in the bathroom during an event a few weeks ago. She was heartbroken, but she said, ‘talk normal’. As much as she, even as a child, probably felt drawn to say ‘don’t yell at me’. So I did. I talked normal. I apologized. Profusely. We work together on the big picture of communication. That’s what I would want from her.

These are all basic pieces of softening ourselves. The world can be cruel, but it is just that. One World. We are all here together. Softening doesn’t make us victims or door mats. Speaking respectfully even through anger and frustration makes us healthier emotionally. Tolerance and patience help us meet others where they are. Awareness helps us take responsibility when we’ve been unkind. Understanding helps us know and accept ourselves and others. That it is okay to need support. Teaches us to *be* supportive. To emote without being coaxed into it, or forced to hide it. And to walk in someone else’s shoes when we aren’t too busy walking in our own.

Kindness is where fulfilling expression meets empathy. And everyone has the time for it.

45 thoughts on “Growing the Golden Rule”

Go Back In Time!

The Matters at Hand